I love my dog. Who doesn't love their dog?

His name is Ganesh. We got him after a trying year. I named him Ganesh after the Hindu God Ganesha, Remover of Obstacles. I thought how fitting, he will be my best friend, love me unconditionally and remove my obstacles of feeling lonely through big losses. I put a lot of thought into this decision.
I do believe it was the right thing to do, to change his name from Byron to something more suitable to his personality. I had no idea how literally accurate this name would be, for my Ganesh has yes, removed loneliness many times and shown me numerous days of unconditional love, but the biggest obstacle that he removes on a daily, sometimes multiple times on a daily basis, is his own daily constitution.
I have gone through feelings of disgust and shame, then thoughts of "how efficient!" But honestly disgust has prevailed. He not only removes his own yard deposits, but those of other canine pals who place their offerings in his path.
I know I need to remedy this, and that probably means following him around like a helicopter Mom with a disposable poo bag wrapped around my hand and placed under his backside in hopes that it will succumb to what is the right thing to do. But honestly who has the damned time?
I know he is my responsibility and there is the possibility of my pal getting worms, or worse. I do take him for walks and when I do ,I always pick up what he leaves behind before he can snatch it up.
I love him. He is handsome and sweet and cuddly. He is not the smartest, but then again who said I was?
So this is my cross to bear. Do I get him a zap collar and go from wind to window and zap him before he digs in? Do I just allow him out when we can walk him, or so I accept him bath breath and all?
For health reasons I know I need to be proactive but boy I wish he just stuck to eating something a little less socially unacceptable.
So, perhaps one lesson is, be careful what you name your faithful companion. Another, know that a dog, while he loves you unconditionally, is still, in the end, just a dog, looking for a steamy pile of obstacles.
Your in sarcasm
Anonymous Mother of Ganesh 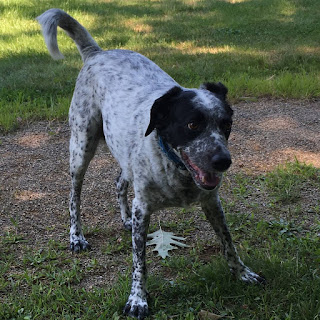 The Guilty Party eyeing his prize

SAY HELLO TO MY little FRIEND?